"Why Are Corporate Employees Such Cowards?"

IBM used to have an ad that basically said: 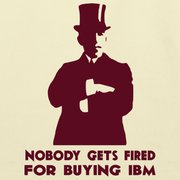 Which probably used to be true. For many years IBM was the market standard. Buying IBM hardware was the generally accepted thing to do. When the middle manager making the decision came to his superiors, he didn't have to fight tooth and nail to defend his choice - saying IBM usually prompted the response "ok, makes sense". Even though it often wasn't the optimal choice.
Unlike popular belief, the majority of middle managers are not intrinsically stupid. Our hypothetical manager knows that the promising little startup company he heard about can probably provide a better product for less money - but what if they can't? The big bosses will have his head if they'll think he spent millions of dollars on the wrong hardware. Why should he risk his job just to save the company a million dollars? It's not his million dollars. Best case scenario maybe he'll get a promotion. IBM apparently understood this aspect of human mentality - and came up with a unique wording for the "IBM is the right choice" message.
Before you dismiss our hardware-buying middle manager as a coward who only cares about covering his own ass - ask yourself "would I act differently?". Be honest with yourself, would you make a decision that had a 30% chance of getting you fired, 20% chance of landing you a promotion and 50% of being taken for granted?
When the organization is risk-averse, allowing very little room for error, so are its employees. Creativity is choked to death in such environments. Instead we get mediocracy generated by average, safe decisions.

During the last couple of months I had the pleasure of talking to more than a dozen seasoned entrepreneurs, hearing advice and learning from their experience. One of the recurring observations they shared is best explained by a story (claimed to be real):
An Israeli company sold 2 airplanes to an Eastern country. Once the planes were thoroughly examined, a very unhappy customer representative called to complain about the uneven number of bandages in the emergency compartment: one plane had 3 bandages , while the other had 5 - "your planes aren't standard, please provide exact specifications".
You might chuckle at the eastern "rigidness" or "lack of common sense", as did I at first, but we would all be wrong. The receiving party representative wants to apply as little decision making as he possibly can - and it's not his job to decide on the correct number of bandages. If something bad happens, he doesn't want the responsibility to weigh heavily on his conscious or his career.
The Israeli "wing it" attitude is very good at creating early stage products and companies, but poses a substantial hindrance to our ability to grow these ~100 employee successful companies into ~10000 employee successful companies.

The same type of risk aversion is clearly visible in the hiring process. One of the main reasons previous employment experience plays such a big role in future employment opportunities is because previous employers basically veted you. If you've been doing something for 2 years at a previous company and wasn't fired - apparently you are capable of doing that something at the new company as well. Oh, you have vast experience doing volunteer/standalone/independent projects? Doesn't count. Partially because you couldn't have been fired...
The HR representative isn't willing to risk her own reputation by "taking a chance" and hiring you. If you have the "correct" credentials but subsequently do a crappy job, at least the decision to hire you looks reasonable and defendable. And from her perspective - she's right.

So, whether you're a young startup looking for early adapters or a talented new addition to the workforce, instead of being frustrated about the lack of enthusiasm for your great new product/skillset - try seeing yourself from their point of view, and then make yourself attractive in their eyes. In the case of large organizations, where blame is personal but profit is company property, that often means becoming the safest, most defendable choice.

Until next time, may you see the world through the eyes of others.