Coloruid: Game Breakdown and the Value of Simplicity.

A few days ago Inbar Duek and I stumbled upon a simple coloring puzzle game on Kongregate called Coloruid (published just a couple of days before). The goal is very straightforward: the whole level should be colored with a single color using a limited number of clicks. Each click coloring one blob in a chosen color - merging blobs of the same color (think of the "fill" tool in Windows Paint). To better understand what I mean take a look at one of the levels: 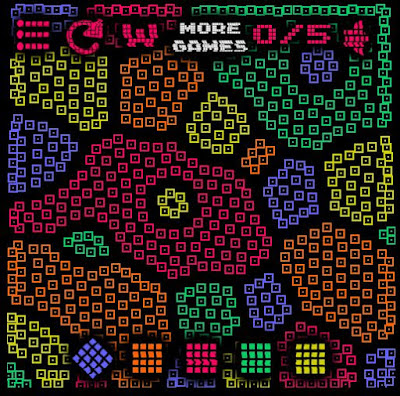 Or just go and play the game yourself - it takes ~2 minutes to complete the introductory levels (the first 3) and no more than 20-30 minutes to finish all 16 levels.

Game Design
The game is very simplistic - which is generally a good thing for a puzzle game: players should think about the challenge presented in the level itself - not ambiguous mechanics. The color changing animation is cool and the colored dots move as a sort of liquid with surface tension - with blobs of identical color merge and become "rounder". This liquid-like mechanism actually had significance in the solution of 1 of the levels, which is bad design when it's only done once (feels more like a bug than an intentional level design decision) - but perhaps it's wrong to judge by the small sample of 16 levels. The game is very short and I feel like the current levels only scratched the surface of possible challenge.
A good indicator for the level simplicity is that the number of allowed moves is always 4 (the number of colors - 1) or 5 (only 1 more). "What that has to do with anything?" you might ask - which bring us to the next part:

Game Solution
It's quite rare that a game can be solved - which means finding a simple algorithm that works for all levels (and isn't brute-force) - but Coloroid is simple enough.
Let's say we have only 2 colors in the game. No matter what's the initial configuration of blobs - we'll need at least 1 click to win - simply because we need to "kill" 1 of the colors. Note that the level might be designed to screw us over and 1 click might not be enough (imagine a zebra pattern - with many alternating color stripes) - but 1 is the absolute minimum. The same is true for N colors - even in the very best scenario that we are able to fully eliminate a color with each click we still need N-1 clicks (it's easily provable by induction if you insist on being rigorous).
Ok - so what? Well it means that if we have a level with 5 colors and 4 clicks we have no choice but to eliminate a color with each click - if at some stage we don't have at least 1 color that's concentrated in a single blob - then the level is unsolvable. Since all levels have to be solvable, there'll be at least 1 concentrated color at any state. If there is more than 1 killable color the order of clicking doesn't matter - since killing a color can only improve the game state (the liquid mechanics can create an exception to this rule - as it does in the 1 level they actually matter - so we ignore this weird side of the game). So for number of moves = number of colors - 1 we have a simple algorithm for winning: always kill a color. The new color should be one of the blob's neighbouring colors - the one that unifies all other blobs of the new color - setting us up for another color kill on the next move. If more than 1 such option exists - choose either (ignoring liquid mechanic).
Extra moves give us the opportunity to reach a unified blob even though the current level state doesn't have one - and that's actually the space where challenge and level design depth reside - because we have a choice. Unfortunately, so far in Coloroid you get a maximum of 1 extra move - which you have to use to get a unified color blob (usually only 1 such option exists) and get back the no-extra-moves situation. In the example level above, the correct move is to color the central red blob in orange - unifying all orange regions - then coloring the new unified orange blob into red - unifying all red blobs - and so on until only a single color remains.

Summary
Though we played Coloroid for maybe 20 minutes, it demonstrated the power of restating goals and seeing limitations. Once a player realizes that the goal is to kill colors and the real restriction is not the total number of moves but the number of moves compared to number of colors (minus 1) - the game becomes much more deterministic and easier (so easy in fact that it became boringly trivial).
The modern world around us has a tendency to overwhelm us with choice and options - many of which turn out to be bad only some time in the future. Consider restating your goals, and work backwards to see the real limiting factors on your plan. Not only does this simple idea help breaking games, but it's also a renown project management theory :).

Until next time, may limitations give you clarity.


{Thanks to Nataly Eliyahu for reading and commenting on earlier versions}