In his book "Predictably Irrational", Dan Ariely discusses the "paradox" of an experienced locksmith. The brief, but somewhat expanded, version is this:
The locksmith, let's call him Winston, is a seasoned professional, with years of training and decades of experience. In fact, Winston is so good that when he's asked to break a lock - the job is usually finished within minutes. As a high-level professional he knows his worth and asks for 100$ as fee, but often the request is met by protest from his clients. "For 5 minutes of work?!?" they complain.
Winston is so well known in the locksmith circles that he has an apprentice - let's call him Bob. Bob is obviously far less experienced than Winston, so it usually takes him about 2 hours to finish the same job - but when he asks for the 100$ he never encounters the same protests.
We've all been there. It just feels "unfair". Winston didn't even break a sweat - and just like that a 100 bucks?? Bob worked hard, put in time and effort - we feel like he "earned it".

This is, of course, irrational. Imagine someone offered you a choice: "I'll fix your problem for a 100$, but you can choose whether it'll take 5 minutes or 2 hours". Stupid question - right? Objectively, Winston provides a better service.
The correct solution to the "paradox", in my view, is to understand that we are paying 5$ for Winston's time and 95$ for his experience, knowledge, training and know-how. Unfortunately, since we didn't see the time and effort he invested in becoming better it seems to us he's just magically good at it and "it's not fair that he's exploiting his talent for his personal benefit". It seems we are all a little bit socialist inside...

Now think about the standard employment contract. You are obligated to provide X hours of your life per month to your workplace - in return for Y amount of money. It doesn't actually say that you have to provide Z amount of productive results. Perhaps it might say something like "do the best you can" or "invest all of your energy/motivation" etc. - and there is some general notion that if you'll suck you'll get fired - but all of that is very vague, subjective and vulnerable to all sorts of exploitation. We've all been there - the long lunch breaks, the random hallway conversations, the web surfing. The "hour counting" method facilitates this behaviour.
But don't worry, modern capitalist employers will rarely let a simple employee take advantage of them - the salary offered takes into consideration that ~50% of an employee's time is probably unproductive.

So what we have is a system that measures, on a daily basis, not how much you've contributed to the company, but how much it cost you - how much you've sacrificed, how much of your life you've given away...
These circumstances prefer "Bob"s instead of "Winston"s. They give you the feeling that 9 hours of your day are "not yours" - so it's ok to waste them.
Drama aside, this trend hurts not only the company (which needs to hire twice as many people to do the same job) but also the employee (who often "endures" his 9-to-5 feeling bored and unsatisfied) and even society as a whole (so much human productivity, ingenuity and talent going to waste). 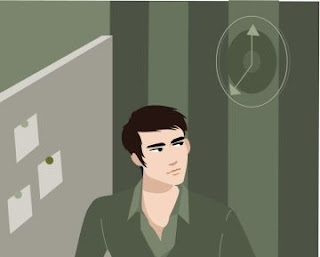 And it's not just the contract. Management often correlates long hours at the office with "good worker" and shorter hours with "slacker". You might hear claims like "it doesn't look good" if someone cuts down his hours - because if they finish their tasks and go home early others might become jealous and try to do the same. Or perhaps "it means he gives more to the company" - which is technically true - the employee does make a greater sacrifice, but it's just another example of the locksmith fallacy: why should the company care how much the employee strained in order to achieve his goals?

There are 2 hidden assumptions in these claims: that worker productivity is equal and that results correlate strongly with time. I believe both assumptions to be wrong - especially in information-rich industries - but that's a topic for another day. Instead of guessing, assuming and correlating - why not just measure the only thing that matters in the first place - the results?

To be fair - I've been a manager long enough to know that in practice it's much harder to measure results rather than work-hours. But somehow in every other business transaction - that's not time for money - we manage to do it. We don't know or care how long it took to manufacture the chocolate bar on the shelf at the store - we just consider whether its price is worth the taste. Hiring freelancers or outsourcing parts of a project is often the same - the hiring company pays for a project - the result - and it's up to the contractors to figure out whether their effort is worth the money.
I believe this difference in mentality plays a large role in the rise of freelancing in recent years.


Edit: note that "measuring results" doesn't necessarily mean going into the "volatile and scary" world of freelancing. Your monthly contract can simply say you must "provide Y productivity" - instead of "sacrificing X time".