Couple of days ago I stumbled upon a simple flash game named Clicker Heroes (CH). It's been played ~7.5 million times at the moment of writing, making it the second most played recent game on Kongregate. I'm pointing this out because CH is part of a small but (apparently) growing niche of "idle" games - games in which the player "does nothing"...
Sounds like a contradiction? How is this a game? Why would anyone care about doing nothing? The answer I offer is part technical and part psychological. Let's start with the easy half - the mechanics:

Imagine an average "grinder" game, where you are supposed to replay levels/zones over and over again to level up your avatar and/or gather resources and/or wait for some rare event (World of Warcraft is a famous example of this mechanism: there are powerful pieces of equipment you might get for defeating a boss - but with very low probability - so players kill the same boss dozens of times). After a while, most of the enjoyment in these games is drawn from the feeling of progress: your hero becomes stronger, your weapons bigger etc. This single "level up" moment makes all the monotonous level grinding worth it (especially if it's accompanied by a shiny animation and blinging sound :) ). Now imagine you could let someone else do the repetitive "chore" of killing generic enemies again and again. You would come every few hours, spend the accumulated XP points on skills, equip the new weapons, spend the gathered gold - whatever you would usually do when not grinding.

Idle games basically simulate this situation. Some progress is happening continuously, even without your presence: money is earned (AdVenture Capitalist), monsters being slayed (and loot collected - like CH) etc. Your role as the player is to choose the allocation of said money/loot - which buildings to upgrade, heroes to hire, equipment to buy. You're getting only the "highlights". In particular, in all but the most hardcore "idle" games, you are not actually idle.

The "price" you pay is giving up the whole in-level game experience, which is often considered the game itself. But what exactly is "the game itself"? This question inevitably brings us to the psychological part: 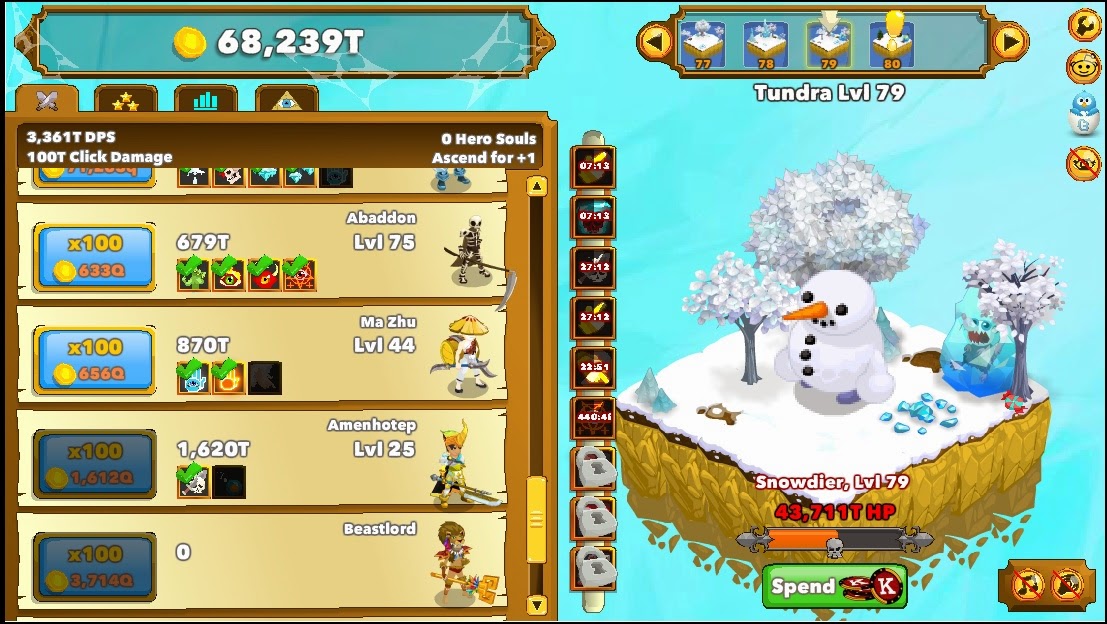 Look at the game screen. Except for the bright colors and cartoonish style there are quite a few numbers/bars etc. These numbers are constantly going up, bars being filled, achievements unlocked, levels reached etc. There is real satisfaction in seeing monsters being defeated - gold dropping in a fountain. Then you upgrade a hero and see how the monster's health bar drops faster - you just got better.

But better at what? You might ask "why would I care about this made up currency/power? It goes up - but it has no meaning". Come to think about it - why would you care about progress in a "real" game? If you're already at it - why do people care about how much money they have in the real world? What car they drive or how much gold is in their Rolex?

For the last couple of questions there is a popular answer - humans seek the approval of other humans - and money/cars are generally regarded as status symbols. At it's prime, World of Warcraft had ~12.5 million active players - so one could argue that the same peer approval logic applies in game status/power - and I'm sure it's part of the game's reasons for success. But what about offline games? Or games with no leader board or other obvious ways of getting bragging rights?

A big part of my own motivation to stick with any given game is the joy of exploration - I want to complete this level to see the next one (and get the next story bit if there is a storyline). This is not unique to idle games - if anything they are quite monotonous even for a low-budget casual game (in CH you get some activated abilities as you progress but overall you just watch monsters being slayed and try to optimize the killing rate). So what is it?

Humans seem to love the feeling of progress. It's almost magical. This is why "progress bar-ing" (defining some task as a clearly visible progress bar) is a widespread technique nowadays in game design ("kill 10 goblins for reward" or the XP-to-next-level bar are two prominent examples) and gamification (think Facebook's or LinkedIn's "Profile is X% complete, add profile pic for Y%"). This simple method combines several powerful motivational tools:
- Clearly stated goal.
- Simple prescription for achieving said goal.
- Visible measure of progress.
"Idle" games are really good at using various forms of "progress bar-ing" to give the player that magical progress feeling - almost effortlessly. The ease with which humans adopt a goal - no matter how arbitrary - is amazing.


Now let's compare to RL (Real Life). Obviously, you care much more about quite a few goals in RL, but often don't invest any resources at least in some of them. Why? I think it's because it's so hard to make the progress towards these goals visible. Let's say you decided to be a nicer person - what are the steps to achieve this goal? How do you know you're getting incrementally better? How high would you like your "niceness level" to be? What does "niceness level" even mean?
See how easy it is for games to be "better" than RL?

This "mind-hack" can be condensed to: "The tendency to make the measurable important instead of the important measurable".
The rat-race to the highest salary is a good example: when choosing a job, instead of imagining how our whole life would look like while working for each employer - we often give way too much importance to the number written on our paycheck. It's a number - you can compare it to other numbers and know exactly which one is better - like the amount of gold or damage in CH. But how would you measure the importance of a comfortable office or nice co-workers? Smart boss or interesting projects?

Keep that in mind when making important life decisions.

Until next time, may you see the progress bars of your life.